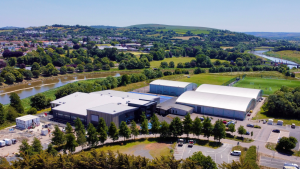 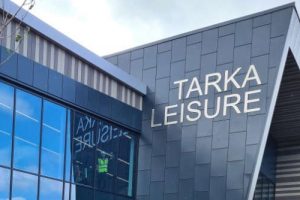 British Winter Olympics hero Eddie ‘the Eagle’ Edwards officially opened the Tarka Leisure Centre in Barnstaple, bringing all of the town’s leisure facilities onto one site on Seven Brethren. Eddie the Eagle cut the ribbon to declare the new facility open and headed straight to see the ‘endless’ ski slope, bringing the opportunity for everyone to try out skiing, snowboarding and tobogganing in North Devon. Eddie says:

“The endless ski slope is such a great idea. It looks a bit like a giant treadmill but for skiing. When I started on my Olympic dream, I was fortunate that my home town of Cheltenham wasn’t too far from a dry ski slope. So, having this facility as part of an amazing new leisure centre here in Barnstaple will hopefully inspire people to give skiing a go, whether that’s just for fun or making a career from this great sport.”

The new centre, to be run by Lex Leisure, is owned by North Devon Council who have worked tirelessly to make the development a reality. With the existing leisure centre at the end of its commercial life, council officers managed to find considerable funding without which the town would have been left without a swimming pool and other much-loved facilities. North Devon Council Leader David Worden says:

“This is a great day for the North Devon community, the council and for officers like Mark Kentell who, as Head of Environmental Enhancement, worked so hard with his team to get the project off the drawing board and into action. It’s been designed and built with customers in mind, who’ve helped to shape the facilities such as movable floors in the swimming pools, improved access for people with disabilities and skiing too.”

Contractors Speller Metcalfe have delivered the £15M project over the past 21 months after coming on site in September 2020. The build has been a complex one as the new centre needed to be connected to the existing Tarka Tennis facility, while it remained open and fully operational, as well as Falcons Gymnastics Academy. With the much-publicised national supply chain disruption, it’s of huge testament to them that the project completion has only slipped by a couple of months.

The project is in part grant funded, including £1.5M from the Coastal Communities Fund and £1.8M from the National Lottery via the Sport England Strategic Facilities Fund. Kevin Mills, Interim Director – Place at Sport England says:

“Welcoming, accessible and inclusive facilities are at the heart of getting local communities active. That’s why Sport England invested £1.8m of National Lottery funding into the development of Tarka Leisure Centre, and we look forward to the positive impact it will have on local health and wellbeing.”