Ex Cllr Bruce Vernon, a  hugely well thought of Barnstaple man has been presented with a scroll giving him the title of Honorary Burgess of the town of Barnstaple. 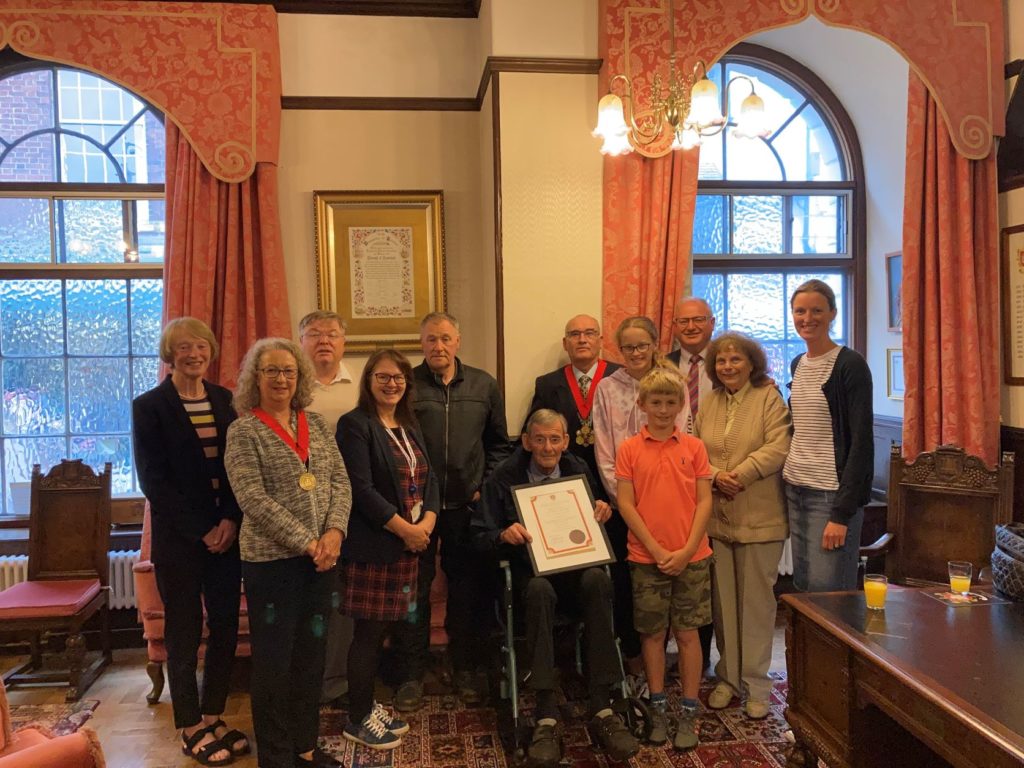 The title is in recognition of outstanding service to town and community over many years and the time spent involved in many organisations and charities, especially in the area of Pilton.

Mayor Alan Rennles said: “At a meeting of the Council held on 11th July 2021 it was resolved That we the Mayor and Councillors of the Town Council of Barnstaple Hereby conferred the title of Honorary Burgess of the town of Barnstaple to Bruce Vernon. It was a great honour to be able to present Bruce Vernon with this scroll. He is extremely highly thought of within the Town Council and the wider community.”

Cllr Val Monk said: “Bruce was always a big help to me when I was starting out, I would go up to him and ask him, “how do I do this” and he would show me, so I am forever grateful for his help. What he didn’t tell me was when I’d had enough to quit, so that’s why I’m still doing it now!”

Cllr Julie Hunt said: “In the 16 years that I have known Bruce he has always had a quiet disposition about him and has always been very popular and well liked. Always supportive of new councillors and the organisations he’s been involved with. I am delighted that he has been bestowed this honour.”

Cllr Arthur Windsor said: “When I first came onto the town council I tried to emulate Bruce’s ways. I had heard a lot about Bruce from my father-in-law John. It was one of the best moves I made, getting to know Bruce. He’s a top gentleman and one of the best councillors Barnstaple has ever had.”

Ex Mayor Cllr Ian Roome said: “Bruce has always championed me and he supported in my first time as Mayor and he had confidence in me. It shows true leadership to do this as a community leader and he played a huge role in safeguarding the prosperity and heritage of Barnstaple. He brought this council to where it is now. It is up to us now as custodians of the council to ensure that this is continued not only in Bruce’s name but for the community. I can’t imagine anyone else more deserving of this honour.”

Cllr Jeremy Phillips said: “Bruce has always had such modesty and so hard working. He deserves this so much and has made so many sensible decisions and has such respect from all his colleagues. I’d like to thank Bruce for all he’s done.”

The presentation was made in the Mayor’s Parlour with Bruce, his wife, daughter and grandchildren along with the Mayor and Mayoress, Alan and Sue Rennles, Cllr Val Monk, Cllr Julie Hunt, Cllr Arthur Windsor, Cllr Ian Roome & Cllr Jeremy Phillips.